To play his own music from the heart, to let him like what he likes, he has made every single choice. Read his interview listening to his work "Passing Season" inspired by the 3.11 disaster in Japan.

First of all, please tell us the reason why you became engaged in music.

I don't remember the reason why I started, but I remember that I adored "instrument players" on TV so much after that, when I was a pupil.

When did you start composing pieces? How did you learn technique such as composition or mix?

Until then, I had kept covering existing pieces using computer music system.

I taught myself composition technique etc., completely on my own.

I have never studied composition or mix using book or whatever. Actually I tried, but I couldn't lol. I think I found my own way listening to others' tunes and copying them…or possibly I haven't found it yet lol.

So I always get worried about my music, wondering if it sounds strange for music experts lol.

I think MEIKO is the most human audio source. I don't necessarily demand her humanity, though lol. It must be a contradiction… All I can say is "I love MEIKO's voice" even if you ask me to talk about her charm lol. In secret… Can't Vocaloid 2 or 3 express the power MEIKO's got? lol.

You have offered your music for a TV program, but what do you think about being engaged in music as second job?

I will not make music my primary job even if I'm skilled enough to do so. I became unsuccessful for a similar reason lol. Once I got a job I had dreamt of when I was a junior-high and high school student, but I got so uncomfortable although I did what I longed to do… I don't know why, but I fell into disgust of it lol.

So I don't want to hate 'MUSIC' because I had such an experience.lol.

I don't want to feel so much pain of making music.

So I make music absolutely for hobby.

Your work, "Change me" was selected for a video game, "Hatsune Miku - Project DIVA - 2nd", as a rare MEIKO song. How does it feel?

To be honest, I worried whether my work was suitable for the game or not lol. Now I'm so glad to find many people are fond of it.

Now, please tell us the concept for your album, "Passing Season".

I'm one of the victims of the Great East Japan Earthquake and these 3 songs are basically influenced by the disaster. The melodies had been done long time before the earthquake but I wrote the lyrics after it.

"Passing Season" was written because I heard someone's word, sometime, somewhere - "The victims' time may have stopped on 3.11, but the season passes by as usual" and I couldn't get it out of my head.

Your solo on synthesizer is one of the highlights in your work. How do you work on it?

Almost without thinking lol. I always play synthesizers a lot losing my own thought, while melodies are growing up.

What did you think when you wrote songs with strong messages?

Honestly, I have a dread of writing lyrics lol.

It's because I used to write only instrumental music. I guess my thought which makes me desperate to write lyrics has resulted in songs like that lol.

What is the good thing that you have been making music?

It makes me really happy when I find that someone listen to my music and feel anything from it.

What is your future plan?

Basically, I'd like to keep making music at my own pace like I used to do. Also I'd like to continue making Vocaloid music but want to do some instrumental music because I used to work on it originally.

Any messages for listeners?

Thank you very much indeed for listening to my music.

I appreciate your continuous support for me.

Thank you very much, shu-t! 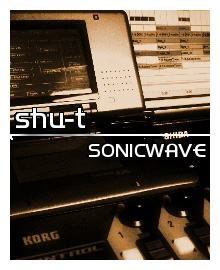 Most famous Vocaloid songs : MEIKO and some characters.

Operational environment : PC is Windows. The sequencer is of primary concern, Ableton Live.